An Exhibition of Paintings by Guy de Montlaur 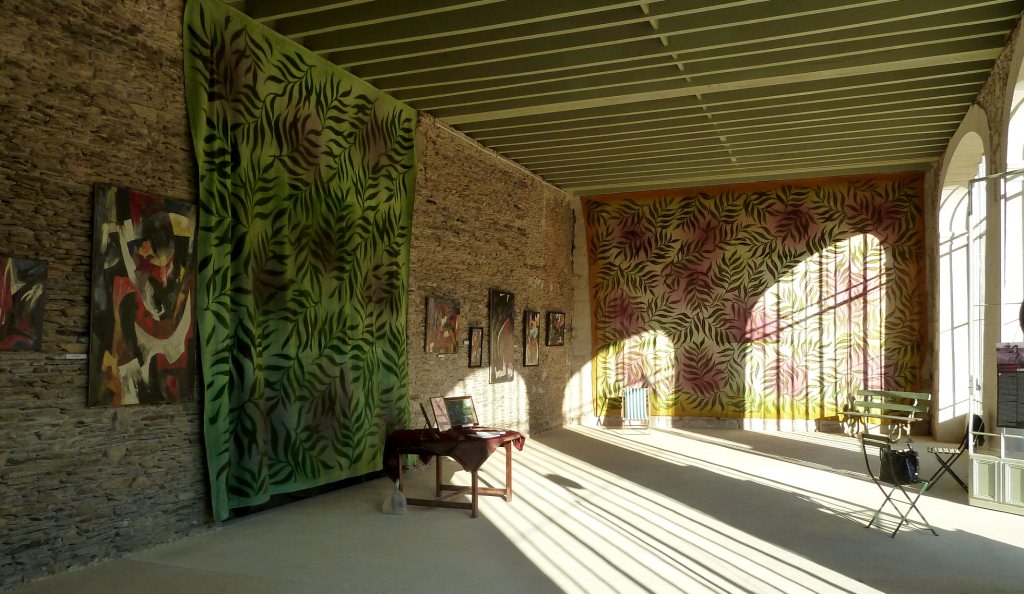 This exhibition was held on the inauguration day of the newly restored Orangery at La Thibaudière. It was dedicated to the memories of Arlette de Montlaur, a resistant who was deported to the Ravensbrück concentration camp and died there in December 1944, and Guy de Montlaur, a painter and soldier who fought for the liberation of his country after landing in Normandy on D-Day.

The exhibition was organized by Guy de Montlaur’s sons, Michael and George. The selected paintings ranged from his very early works, such as landscapes painted at La Thibaudière when he was 18,  to his cubist (early 50’s), baroque (mid-50’s) and final expressionist paintings. From 1960 until his death in 1977, Guy de Montlaur’s style evolved dramatically, together with his technique and his conception of aesthetics: he fully expressed, during this period, a deep and sharp suffering born from the horrors he encountered during his war years.

The Orangerie Batiks illuminated by the sun through the glass windows

Over five hundred people visited the exhibition during these two days. Large batik cloths, specially made in India before the exhibition, decorated the Orangery, warmly illuminated by the late summer sun. Without doubt, many of the visitors had never been to an exhibition of modern art.

After exploring the Orangery, the visitors could continue their visit by wandering in the chateau’s huge park, an English landscape park designed by Choulot a well-known nineteenth century landscape architect.