I want to shout: “Just look! Look at the mystery! It is piercing your eyes.”

And no one sees it. Nobody but myself. People see colours, shadows, lights, forms. They see (what do I know?) the canvas, the stretcher nails. And I don’t understand they can’t guess all the distress here, under their eyes, as it was during the war: the clamour, death, love, treachery; the lies and the fear. And still more that I cannot say, but I know how to do it.

His biography More on Wikipedia

This painting is representative of the period when Montlaur lived in Fontainebleau. This characteristic style follows his abstract-geometric period of the early 50’s where shapes and colors were well defined and perfectly delimited. Here, in a first stage, the painter “covers the canvas” (in his own words), then, he substitutes the palette knife for the paintbrush. He breaks the shapes, scrapes the thick layers of paint to reveal the underlying color(s). The resulting shapes become ghostly, fantastic creatures, dark inhabitants of his never-ending nightmares, his war memories.

The title of the painting comes from Guillaume Apollinaire’s poem “Les Sept épées” (The Seven Swords). Sainte-Fabeau (Saint-Faggot) is the fifth of these swords.

Fifth, the Saint-Faggot is bright
and is the fairest of distaffs.
A cypress on a tomb, alight
where four winds kneel and force their draughts
in torches’ flaming, night on night.

This stanza is about death: the distaff in the hands of the Fate, the cypress, the tomb. The sword is one that pierced the heart of the Virgin Mary and maybe also one of the seven deadly sins. As always, Apollinaire plays on the meaning of words, in the same way, the painter plays on the colors and the shapes of his creations.

One can see, lying at the bottom of the painting a gray shape with a red cross, is this the tomb? White forms fall from the sky, others, black and blue are kneeling. Montlaur was perfectly acquainted with the poems of “Alcools”, it is certain that he wanted to faithfully reproduce in his painting the hermetic words of the poet. 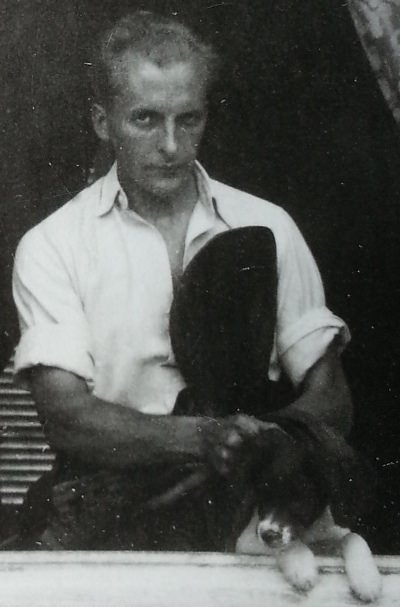